An easy day trip from Hiroshima , the castle town of Iwakuni has some distinctive features. The serene flower gardens of Kikko Park , the soaring arches of Kintaikyo Bridge , impressive views from Iwakuni Castle and the unique sacred white snakes of Iwakuni make it a rewarding destination to spend a morning or afternoon.

The Sanyo Shinkansen stops at Shin-Iwakuni Station, and the trip from Shin-Yamaguchi Station takes under half an hour. Alternatively, hop on a local train on the Sanyo Main Line to Iwakuni Station. Travel time from Hiroshima is 50 minutes. The two stations are located at opposite sides of the city, so be sure to check your final destination before you travel.

A marvel of engineering

Kintaikyo Bridge , with its unique five-arched design, spans the Nishiki River. An enchanting sight in any season, the bridge is particularly stunning in early April when over 3,000 cherry blossoms bloom along the banks of the river and in nearby Kikko Park .

The bridge was created without nails

The main keep of Iwakuni Castle

Hike or ride the convenient Iwakunijo Ropeway up to the impressive Iwakuni Castle . Visit the castle museum with samurai armor and artifacts and admire the views across the city from the top floor.

Built in homage to the original castle constructed here in 1608, this 1962 reconstruction captures the essence of the original. See the ruins of the former Iwakuni Castle at this site.

When you head back down, make sure to stop off at Iwakuni Art Museum, where you'll find interesting exhibitions concerning the lives of local samurai, and the armor they wore. The authenticity of the museum's take on samurai history is underscored by their title for this part of their exhibits: Life and Death Culture.

View from the castle keep

History and beauty at Kikko Park

A popular site for cherry blossom viewing in spring, Kikko Park is the former site of Kikkawa Hiroyoshi, the third lord of Iwakuni. This calm garden offers not only tranquility but also provides a fascinating insight into local history.

There's much to keep visitors entertained, including three museums, and two former samurai dwellings which can be viewed from outside.

The mystical white snakes of Iwakuni

Iwakuni is home to a rare type of white snake, known as shirohebi. Designated as a Natural Monument of Japan, the snakes have an unusually high, naturally occurring rate of albinism. The snakes were revered as gods, and it was believed that households where a shirohebi settled would prosper. Find out more at the White Snake Museum, near Kintaikyo Bridge .

The special sushi of Iwakuni

Iwakunizushi is a particular type of pressed sushi made in a distinctive square shape. Layered like a cake, the sushi is filled with colorful ingredients such as cut fish, chrysanthemum leaves, lotus root, sliced egg and shiitake mushrooms.

Iwakuni has also recently become a famous spot for ice cream, with several shops around Kintai Bridge selling an unbelievable variety of flavors, including sakura, green tea, and limited-edition seasonal flavors. It's the perfect way to finish off your trip to the area. 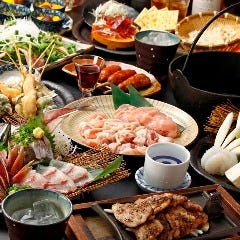