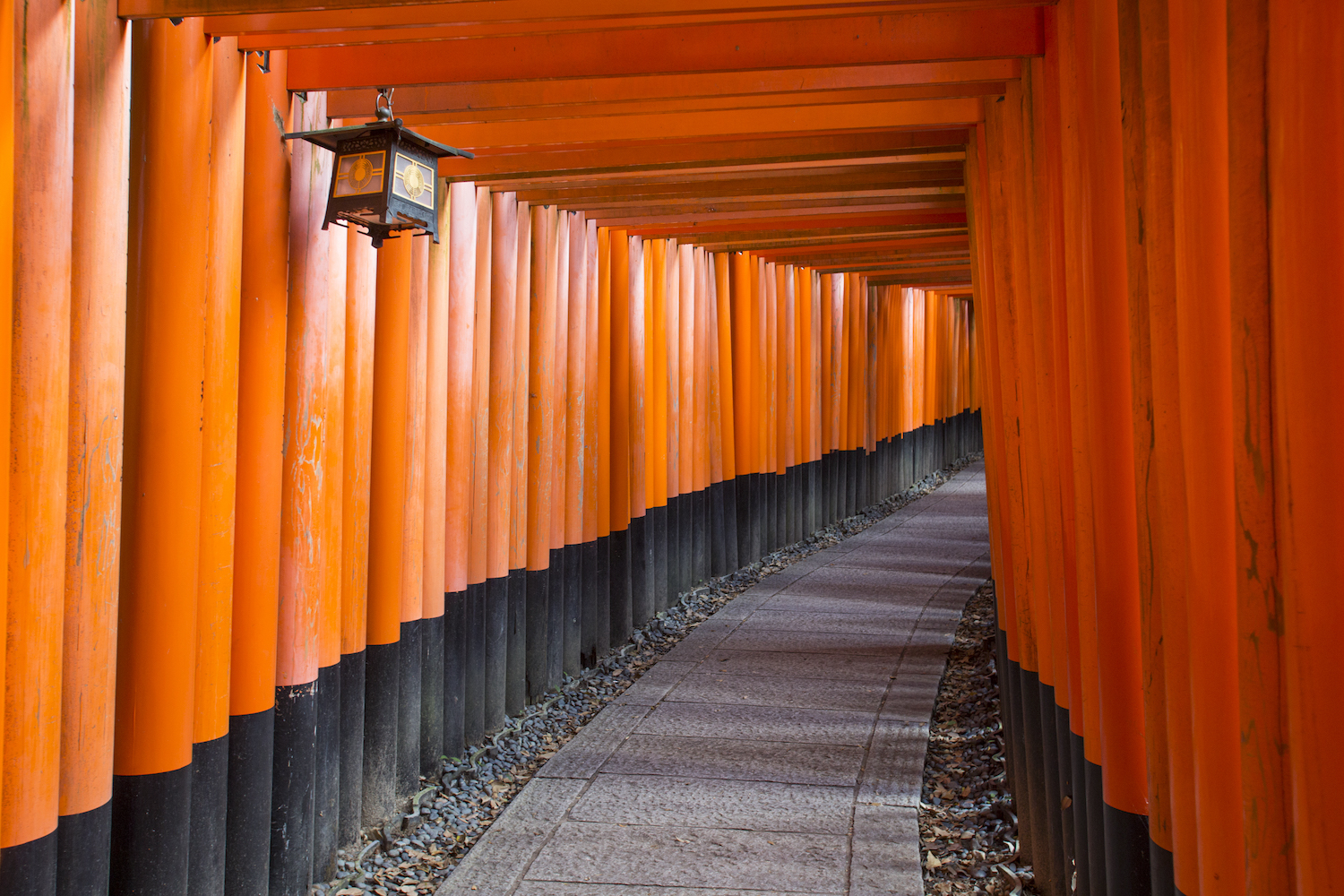 Dedicated to Inari, the deity of a good harvest and success in business, Fushimi Inari Taisha is the head of all of Japan's Inari shrines. The seemingly endless path of vibrant orange torii gates that line the approach to Mt. Inari makes for an impressive setting and is one of the most famous images of Japan.

There are five deities, or kami, worshipped at Fushimi Inari Taisha. Over 30,000 shrines across Japan are dedicated to Inari deities. They are enshrined on company premises, building rooftops and sometimes on private land. Fushimi Inari Taisha is both a shrine of the people and of the Imperial Court, and emperors often made donations here in ancient times.

It is said that the shrine was founded in 711 before Kyoto became Japan's capital. The path leading up 233-meter-tall Mt. Inari is dotted with many stone altars (otsuka) and marked by approximately 10,000 torii gates. This long tunnel of vibrant orange torii gates is an iconic sight in Kyoto.

Companies and individuals from all over Japan dedicate torii gates to shrines because of their divine properties for business prosperity. The approach to Okunoin shrine is called Senbon Torii (one thousand torii gates). It is believed there are actually as many as 10,000 torii on the whole mountain. Some of the torii were dedicated in the Edo period (1603-1867).

It takes between two to three hours to tour the mountain. About halfway up, there is a souvenir shop and tea stall where you can buy snacks, drinks and ice cream.

There are Japanese restaurants and souvenir shops along the approach to the shrine. Here you can find sweet shops selling tsujiura senbei, a type of fortune cookie believed to date back to the 19th century. Some think they are the origin of the Chinese-American fortune cookie.

Foxes are believed to be the divine messengers of the deity Inari. Statues of foxes can be seen throughout the shrine. In Japanese mythology, foxes like to eat aburaage, or deep-fried tofu. Tea stalls on the approach to the shrine sell inari sushi (rice stuffed into pockets of aburaage) and kitsune udon (wheat noodles in broth topped with aburaage). Both make for delicious light meals.

To tour the tunnel of torii gates you need to walk around the mountain, so set aside a few hours, at least, for a visit. It's recommended to plan the trip from late morning until mid-afternoon, with a light lunch on the hike.

A visit to Fushimi Inari Taisha can be easily combined with a visit to many other Kyoto locations, such as a visit to Nishiki Market in the morning followed by another temple in the afternoon.