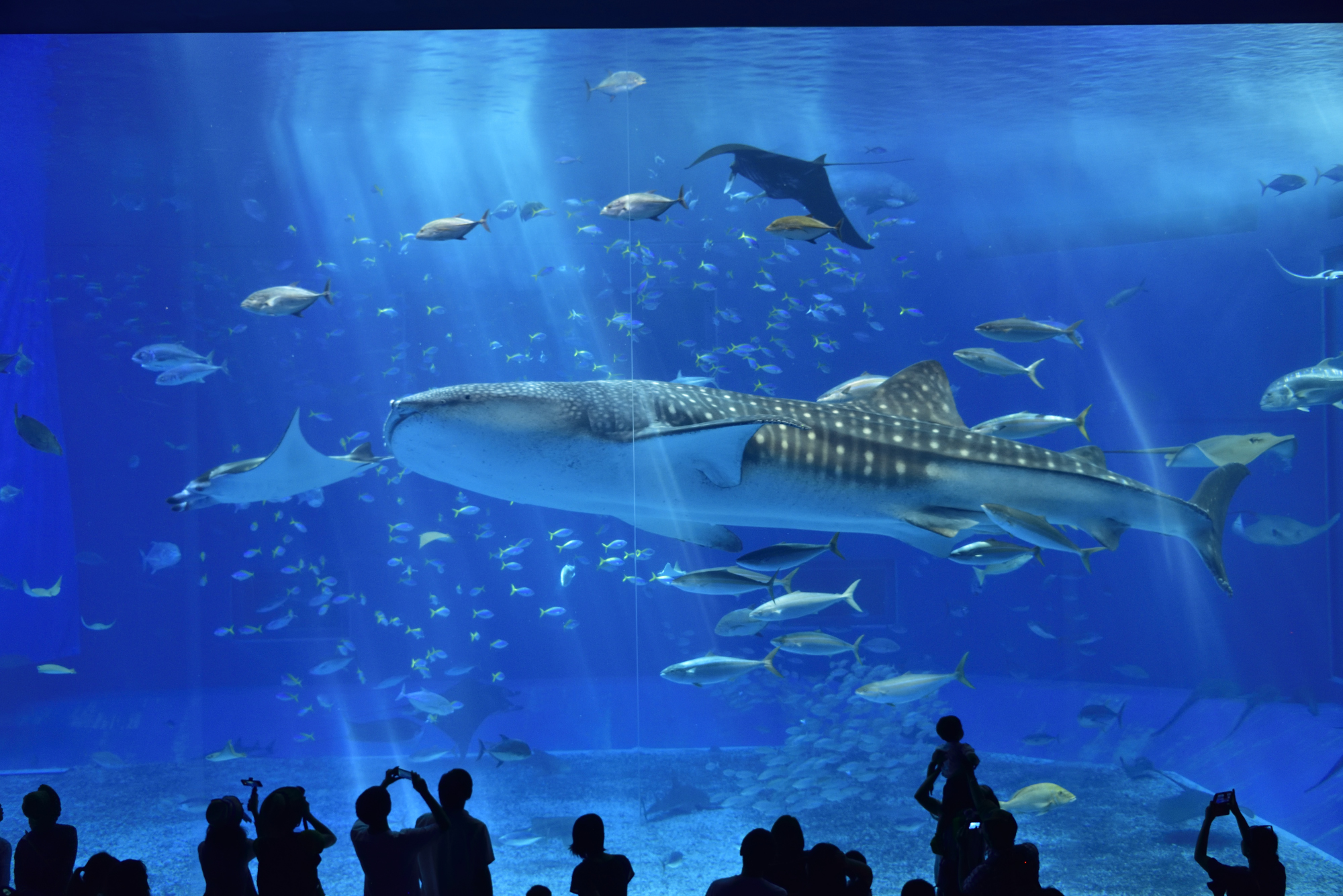 An aquarium where you can encounter Okinawa's seas

Okinawa Churaumi Aquarium is part of Ocean Expo Park and is considered one of the biggest and best aquariums in the world. Its tanks are massive enough to hold whale sharks.

Located on the coast of Motobu Peninsula, the aquarium was rebuilt in 2002 and is now home to 680 species of marine life.

Okinawa Churaumi Aquarium (in Ocean Expo Park) is served by a number of bus routes. It takes about two and a half hours from Naha.

The Yanbaru Express Bus runs six to seven trips from Naha Airport and central Naha to the Ocean Expo Park. It is also possible to get there using local bus service, but it is not the most convenient route due to its infrequency in Nago.

By car, the journey also takes about two hours, though it can be considerably longer depending on traffic. Take the Okinawa Expressway from Naha to Kyoda in Nago, and then travel via the Motobu Peninsula to Ocean Expo Park.

The aquarium opened as the Marine Life Park, built for the Okinawa International Ocean Expo in 1975

The aquarium was rebuilt in 2002

After its relaunch, the aquarium welcomed its 50 millionth visitor in 2015

There aquarium exhibits about 680 species of creatures

When you arrive at the entrance to the Okinawa Churaumi Aquarium, you will be greeted by a monument of a whale shark, the largest fish species. Take a selfie with the beast before continuing to the main exhibits.

As you enter the aquarium, visitors will find an aquarium that is the world's first large-scale breeding of live coral using an open system.

One of the most popular exhibits is the main tank. Known as the "Kuroshio Sea," the tank is so large that it can display the whale shark, which can measure up to 8.8 meters in length, and also accommodate manta rays and many species of rare fish.

The water volume of the tank is 7,500 tons, and the thickness of its acrylic glass is 60 centimeters.

Giant whale sharks seem like they would eat all the fish around them, but despite their size they are peaceful creatures that eat small plankton. Don't miss the feeding, which takes place three times a day in the Kuroshio Sea tank.

Manta rays are notoriously difficult to breed, but in 2007 the Okinawa Churaumi Aquarium became the first aquarium in the world to successfully breed them in captivity. Currently, four manta rays can be seen in the large aquarium tank.

Other tanks in the aquarium include one that displays mainly sharks, and another that displays luminous creatures. There is also a splendid outdoor pool where dolphins, manatees, and sea turtles can be seen.

The aquarium is a facility located in Ocean Expo Park. Ocean Expo Park was built on the site of the Okinawa International Ocean Expo held in 1975. Stretching three kilometers along the coast, the large park includes the Oceanic Culture Museum, the Tropical and Subtropical Arboretum, the Tropical Dream Center botanical garden, and Emerald Beach.

Also in the park, you can freely explore the Native Okinawan Village, featuring recreations of Okinawan homes and buildings from various times and places in history.

Ocean Expo Park is open from 8 a.m. to 6 p.m. Admission is free to all facilities except Okinawa Churaumi Aquarium, Tropical Dream Center, and the Oceanic Culture Museum. Please check the official website for opening hours of the aquarium and other facilities.