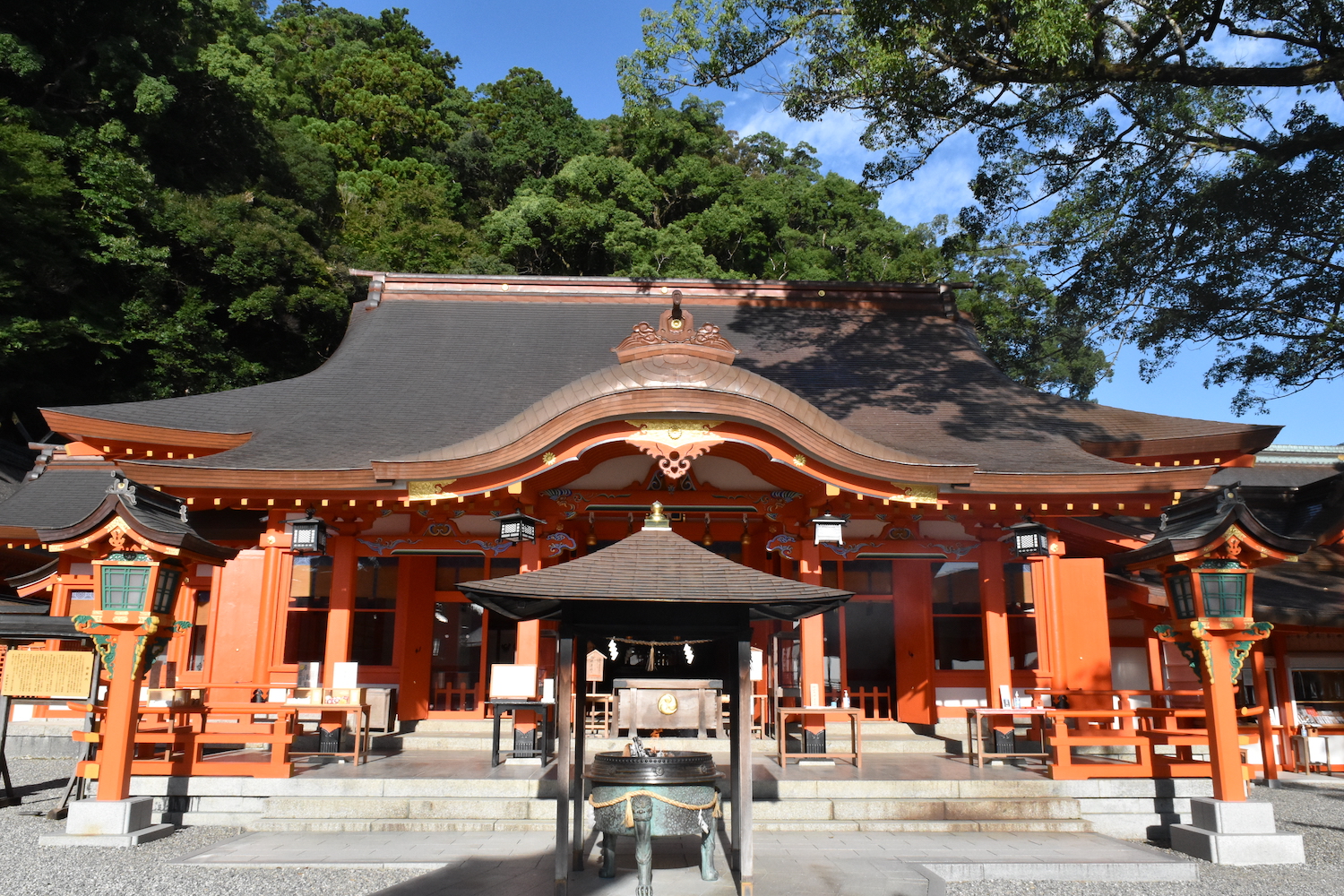 A Shinto shrine and a Buddhist temple next to picturesque falls

High up on Mt. Nachi , the brilliant orange and white Kumano Nachi Taisha Grand Shrine enshrines the 12 deities of Kumano and the deity of Nachi Falls .

One of the designated Kumano Sanzan shrines, it is one of the ultimate destinations for pilgrims trekking the historic Kumano Kodo Pilgrimage Route .

Nachi Taisha can be reached via a bus from Kii-Katsuura or Nachi Station.

Get the bus from Kii-Katsuura Station and ride 30 minutes to the Nachi-san stop. The stop before is Nachi-no-Taki-mae, the stop for Nachi Falls. Alternatively, take the bus from Shingu Station for about 15 minutes and get off at Jinja Otera-mae.

While it is free to enter the temple grounds, entry into the shrine's treasure room costs 300 yen

If you want to see the shrine as pilgrims would have approached it, get off the bus at Daimonzaka instead of Nachi-san. The stone staircase still feels ancient and leads you up to the entrance of the shrine. You can rent 9th-century Heian-period costumes from the nearby Daimonzaka Chaya and climb the ancient staircase to arrive at the Grand Shrine in historic style.

As you enter the shrine grounds, you'll notice a large camphor tree whose boughs beautifully spread over the shrine's roofs. Nearly a thousand years old, it is regarded as sacred. It has a natural hollow in its trunk means you can squeeze through inside to listen to its ancient breath.

Camphor trees are revered in Japan because of their longevity, giving them an eternal, spiritual presence. One famous example of this is in the film My Neighbor Totoro, where a large camphor tree serves as the home to the forest spirit.

A tale of two sacred sites

In a symbiotic religious relationship, Kumano Nachi Taisha Shrine and the neighboring Seigantoji Temple were once joined together, offering a place of worship to followers of Japan's native Shintoism joined with imported Buddhism. For a long time, the buildings operated as a single entity, but in the 19th-century the Meiji government forced the two religions to be separated.

Here, the two spiritual structures remain connected and represent harmony in the presence of nature, both dedicated to the powerful and striking wonder of the area—Nachi Falls—that inspired people long before either were built.

The highlight of the shrine's festival calendar is the Nachi Fire Festival held every July 14. In an ancient ritual, torches are set ablaze and carried down the path to Nachi Falls at the head of a long procession which evokes the cascade of the falls. A portable shrine is carried to the falls and the torches lead the procession to purify the route.