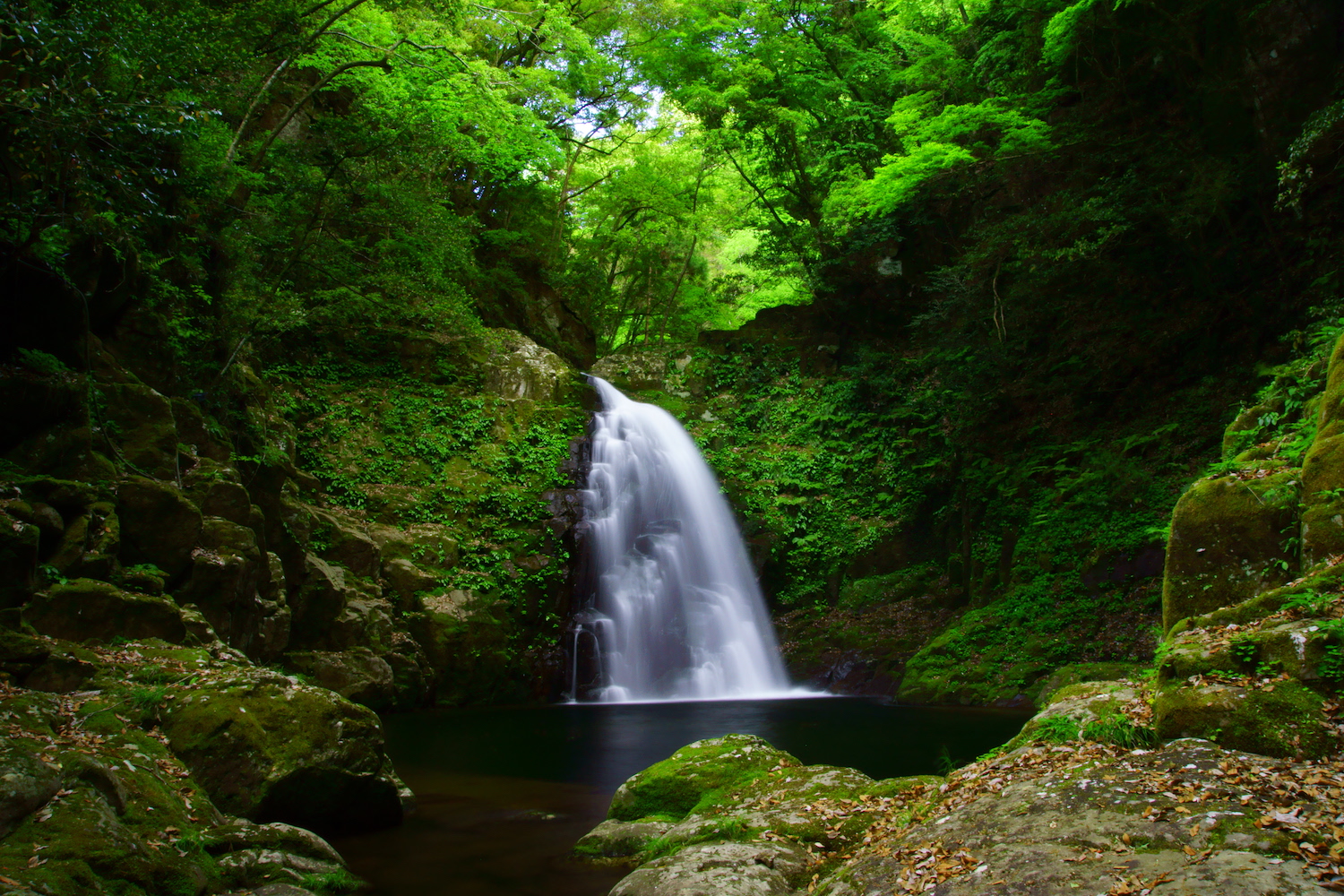 The Akame 48 Waterfalls offer a unique mix of ninja excitement, mysterious trails, the waterfalls themselves and enormous amphibians.

The falls are most easily reached by train to Akameguchi Station on the Kintetsu Line, followed by a 10-minute bus ride.

The ride is just over an hour from Osaka-Namba Station, and about 90 minutes from Kyoto or Nagoya Stations.

Every season offers fantastic sights along the falls. Spring brings cherry blossoms, and autumn a dazzling array of colors. Summer is a verdant, if humid, paradise. Winter requires more care along the path, but you may be rewarded with frozen waterfalls if the weather is sufficiently cold.

The remote and forested Akame Valley was a training ground for the Iga-ryu ninja between the 15th and 18th centuries. There are numerous waterfalls along a four-kilometer stretch of the valley accessible via a walkway along the river that provides up-close views. The waters pour into a gorge at the bottom of the valley at Muro-Akame-Aoyama Quasi-National Park.

The name Akame, meaning “red eyes,” derives from a mythological encounter at the falls between En-no-gyoja, the founder of Japanese mountain asceticism, and Fudo-myo, a fierce esoteric Buddhist deity. There aren't actually 48 falls; the number likely comes from the traditional number of vows taken by beings in the Buddhist pantheon known as bodhisattvas.

It takes three to four hours at a leisurely pace to fully take in the falls. There are restrooms and teahouses along the route. You'll also occasionally encounter stairs along the way; keep in mind that steel steps may be slippery when wet.

Also along the route is a campground with a barbecue area.

Senju is named for how the splashing water resembles the "thousand arms" of the merciful Buddhist deity Kannon.

Nunobiki is the highest waterfall at 30 meters, and over the millennia its force has eroded the stone below to form a pool 30 meters deep.

Ninai Falls is popular for its gorgeous view, and Biwa Falls is said to resemble a giant bathtub.

Take your time on your way in

At the entrance to the area, a ninja training school offers a course on the nearby mountain slopes for adults and children ages 4 and up. The program includes ninja costume rental, with a choice of colors ranging from traditional black to no-way-they-won't-see-you pink. The training lasts about 90 minutes and includes ninja star throwing, wall scaling, and rope traversing.

If you're really feeling the stealthy spirit, you can also rent a ninja outfit to wear before setting out on your journey to the falls.

The nearby Japanese Salamander Center is a cozy little educational curiosity offering up-close looks at the Japanese giant salamander. It's the second-largest salamander species in the world, measuring up to 1.5 meters. Nowadays, the amphibian is considered near-threatened.

Still, keep an eye open near the riverbank during your hike. People still spot them in the wild from time to time, though this is less likely if you've opted for the pink ninja costume.