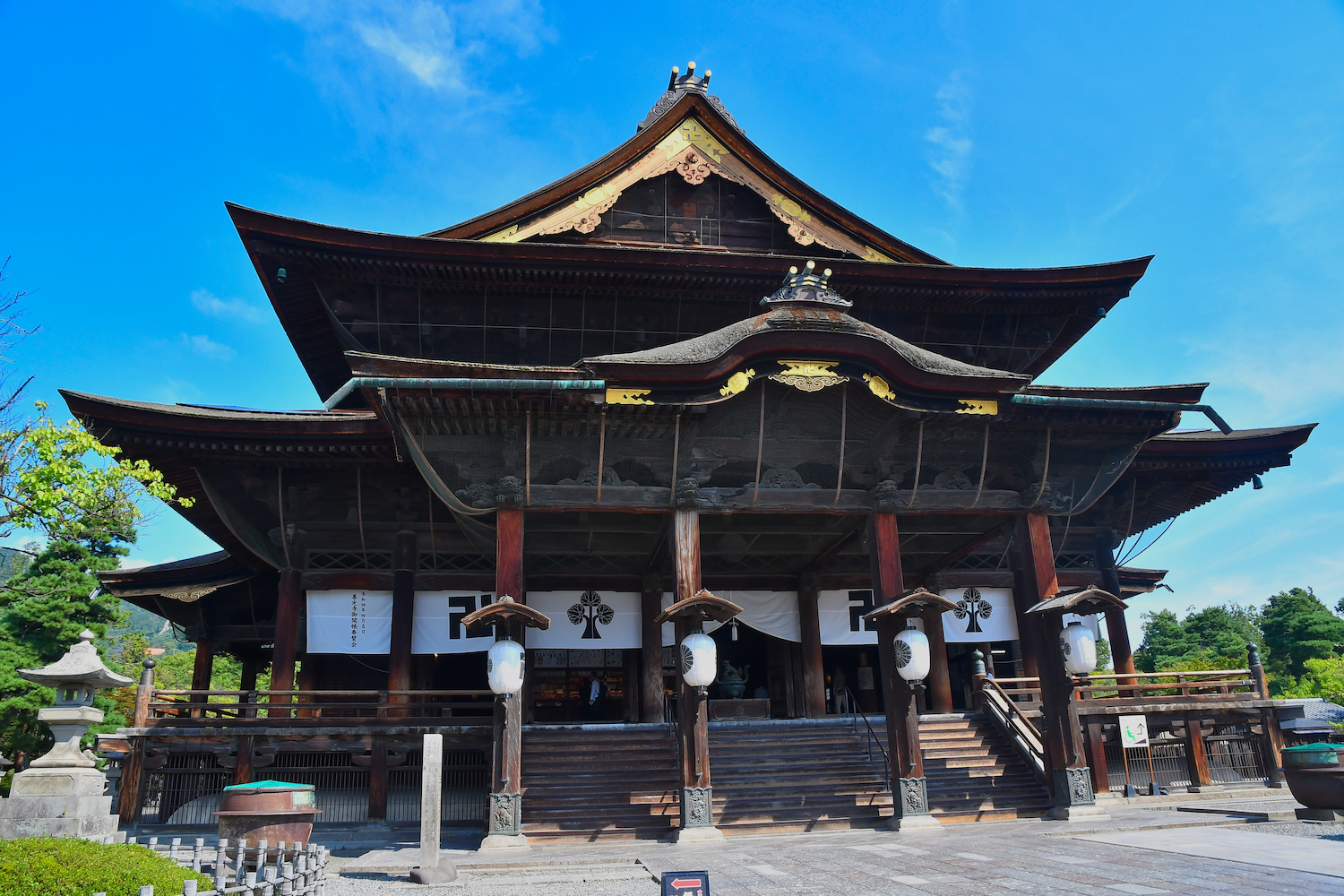 Zenkoji Temple is long cherished as a temple for the common people. It does not affiliate with any Buddhist sect and accepts all without distinction. It also enshrines what is believed to be one of the oldest Buddhist statues in Japan––the statue of Ikko Sanzon Amida Nyorai(Amida Triad Sharing One Halo), the Buddha of immeasurable light and life. The statue of Ikko Sanzon Amida Nyorai, also known as Zenkoji Nyorai was first brought to Japan from the Korean Peninsula in 552 and, while it cannot be viewed first-hand, remains a symbol of openness and acceptance.

Zenkoji Temple is accessible by the Hokuriku Shinkansen (bullet train), taking 1.5 hours from Tokyo to Nagano Station. The temple is 1.8 kilometers from the station and can be reached in 30 minutes by foot or 15 minutes by bus.

Zenkoji Temple is highly esteemed as an essential destination for any pilgrim, regardless of the distance

The 1.8-kilometer stretch from Nagano Station to Zenkoji Temple is lined with stores and restaurants

A Buddhist image kept so secret, even the head priest is not permitted to see it

The Ikko Sanzon Amida Nyorai, also known as the Zenkoji Nyorai, is the central object of veneration at Zenkoji Temple. The statue of Ikko Sanzon Amida Nyorai in the center of a single halo with Kannon (left side) and Seishi (right side) has remained shrouded in secrecy, concealed from all eyes since 654. During the Kamakura period (1185-1333), however, a second statue was sculpted in the image of the Ikko Sanzon Amida Nyorai to serve as an embodiment and figure of worship for the people. This statue, known as the “Maedachi Honzon” is publicly displayed in the main hall once every seventh year during the dedicated “Gokaicho” (revealing) ceremony. The statue is connected to the towering “Ekohashira” pillar in front of the temple by the rope, which, according to belief, will connect anyone who touches it to the “Maedachi Honzon” and bring good fortune.

A diversity of interactive experiences

Nowadays visitors can partake in activities and experience the history and culture of Zenkoji Temple, which dates to 642 when the statue of Amida Nyorai was brought from Baekje, one of the three ancient kingdoms of the Korean Peninsula, in 552 and enshrined at the temple.

The majestic Sanmon gates, first built in 1750, underwent large-scale renovations and now seconds as an observation area that offers sweeping views of the temple grounds and main hall. Try taking off your shoes and climbing the stairs to the second floor; it's worth the effort.

As you approach the main hall, you'll find the Binzuru sonja statue, also called "Nade-botoke" (patting Buddha) sitting in the entrance. Try patting its head to ease any weariness and receive its healing powers.

So many visitors have rubbed its head since 1713 that its face has been worn down to the point of being unrecognizable.

At the far end of the main hall is the entrance for the tour around the Buddhist altar. Here you will find a dark corridor that leads to the basement of the main hall. Legend has it that if you follow the corridor and touch the "key of enlightenment," you will connect with the hidden Zenkoji Nyorai who is seated just above the lock. Good fortune is said to come to those who do.

There are 39 temple lodgings on the temple grounds, of which many offer overnight accommodation as well as a place of quiet retreat. Guests staying at the temple lodgings can partake in daily morning prayers and chanting at sunrise when all the monks gather.

Zenkoji Temple (non-sect temple) is protected and administered by Daikanjin Temple (Tendai sect) and Dahongan Temple (Jodo sect). Daikanjin Temple runs regular sutra transcription sessions on the third Sunday of each month and are open to everyone without reservations. Depending on the day of the week, you can participate in, zazen（zen-style meditation）, temple yoga, and tea ceremonies.

The Zenkoji History Museum, inside the temple grounds, has a collection of Buddhist sculptures which you can view up close. Visitors can enjoy shopping and dining along Nakamise-dori, a street within the precincts of the temple, or Omotesando Avenue, a street that leads outside the precincts of the temple. Alternatively, they can appreciate Japanese aesthetics at the nearby Nagano Prefectural Museum of Art. The Hokusai Museum , near Obuse Station, is a mere 30-minute train ride from Nagano Station.