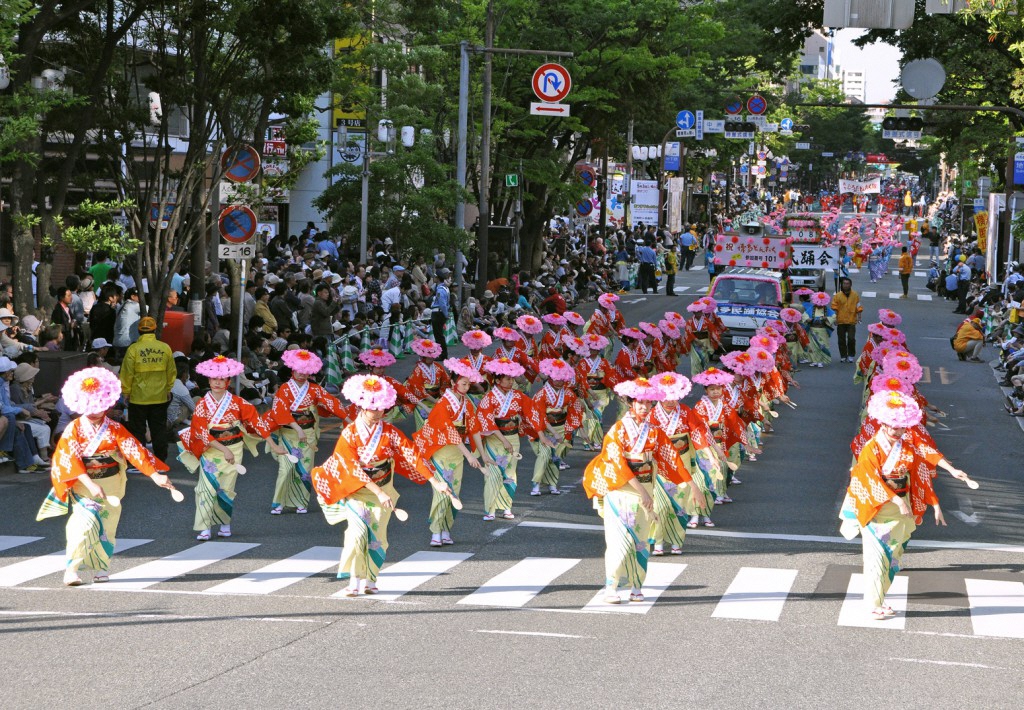 Japan's largest festival is held annually in Fukuoka during a major holiday weekend in May, and attracts 30,000 participants and over two million spectators. While there have been breaks in the past, the festival is said to have originated in 1179 during the Heian period, and has continued for more than 800 years.

The festival takes place close to Tenjin Station, which is on the subway from Hakata Station.

Dontaku events are held across Fukuoka City , but the main parade runs from Gofuku-machi Station to Tenjin Central Park. A smaller parade takes place just outside Hakata Station. Recently, there have been events around the Hakata Port area.

Hakata Dontaku is held on May 3 and 4 every year during the busy holiday period of Golden Week. Through the course of the festival, tens of thousands of revelers dressed in bright, traditional costumes dance through the streets of Fukuoka . Over the two days of processions, an estimated two million people cheer on the participants.

Call of the housewife

The festival features groups of extravagantly costumed dancers, who parade through the streets clapping shamoji. This tradition is said to have originated from a housewife who was preparing dinner, and joined in by tapping the shamoji (rice scooper) in her hand.

Hakata Dontaku dates back to 1179 when, in its earliest iteration, it was known as Matsubayashi, a festival to celebrate the Chinese New Year and honor the area's feudal lord. In the Edo period (1603-1867), the festival evolved into a parade known as Torimon. This parade was led by people dressed as gods.

The history of Dontaku, and a change of name

Although the Meiji era (1868-1912) government banned the parade because of its extravagance, the citizens of Hakata maintained the festival by changing the name of the parade to Dontaku. The word Dontaku is derived from the Dutch word for Sunday, "Zontag." The Dutch were the only foreign nation permitted to trade with Japan, from Nagasaki , during the Edo period.

Besides the dancers, the festival features decorated floats called hana jidosha. These flower buses were originally just decorated with brightly colored fresh flowers, but have evolved to use electronic displays. Throughout the festival period, the six hana jidosha cruise through the streets of Fukuoka , and are brilliantly lit up at night.

The festival is two days. On May 3, the Matsubayashi Parade is held early in the morning, reenacting the original parade that took place in 1179. The parade is led by three gods of fortune riding on horseback and a group of dancing children.

The Dontaku parades are held in the afternoon on both May 3 and 4. These last all afternoon, and incorporate dancers, marching bands and the hana jidosha. In total, there are around 750 groups of performers, comprised of groups from across Fukuoka and Kyushu . More recently, international groups have also been invited to take part.

As well as the parades, around 30 stage areas are set up across the city that each host a wide variety of performances, along with food, drink, and game stalls. Watch for Hakata Niwaka. The masks of these comedians were said to originally used to hide the identities of those satirizing the government in open street performances.

Closing out the two-day festival are rousing renditions of the Dontaku dance that the festival's spectators are invited to participate in. Get involved and dance the night away.