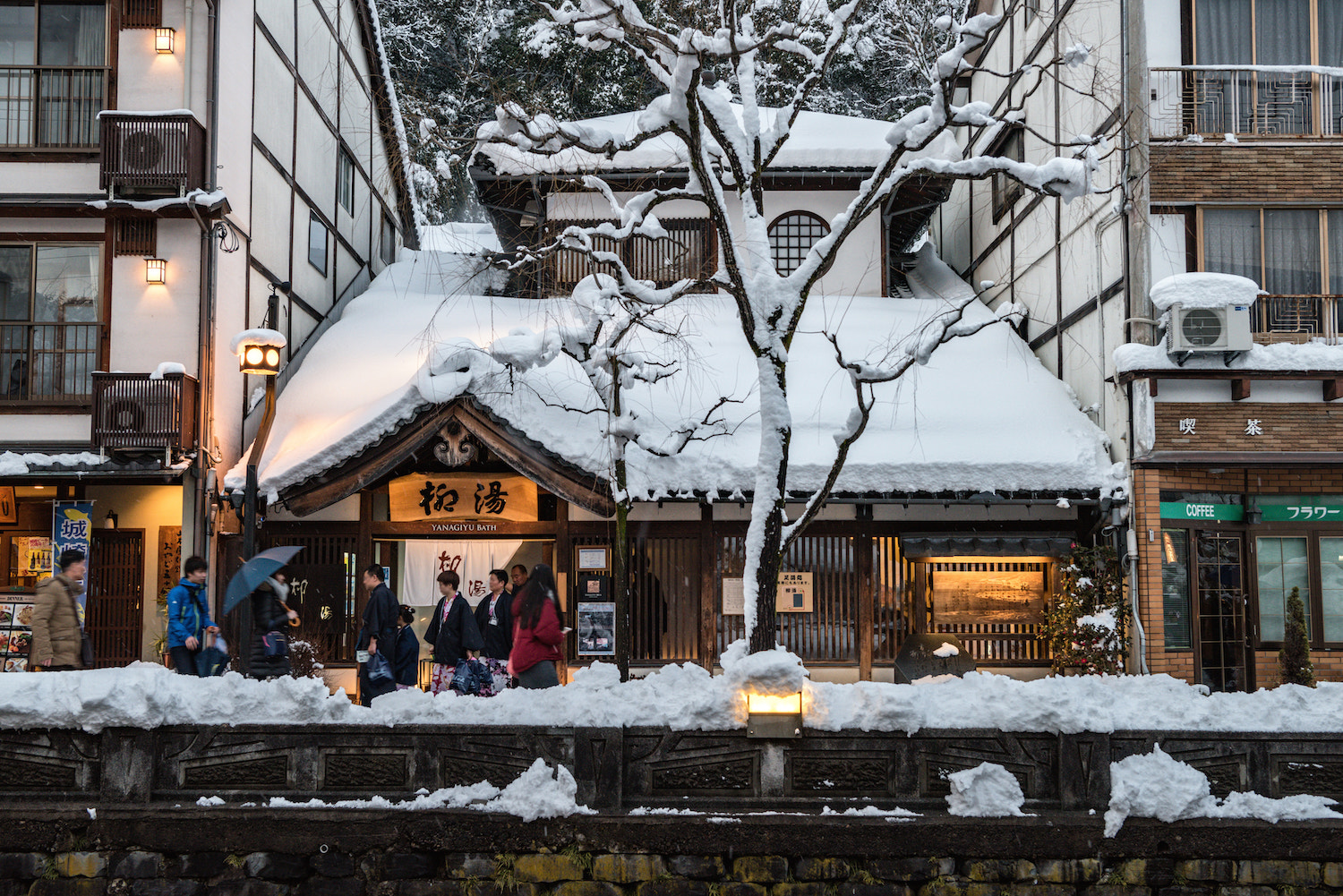 Kinosaki Onsen Station is the gateway to the town, connected by the San'in Main Line to Kyoto and Osaka.

It takes about 2.5 hours from Kyoto or Osaka to Kinosaki Onsen Station by direct express train.

On either side of the Otani River are numerous Japanese inns, or ryokan, most of which have their own onsen baths.

The seven public baths dotted around the town are one of the unique characteristics of Kinosaki. Visitors to the area can buy a one-day pass for 1,300 yen (as of November 2021) that allows bathing in all seven. Additionally, hot bubbling foot baths can be found in numerous locations. If you are staying at one of the town's ryokan, all of the public onsen can be accessed for free from when you check in until you check out.

Slip on a yukata and stroll about town

It is not uncommon to see visitors to the area walking around the town in yukata—the thin cotton kimono that are closely associated with Japanese onsen towns. During the colder winter months, a warm, cotton haori jacket is worn on top of the yukata to keep out the cold.

Towards the western end of Kinosaki Onsen is Onsenji Temple, which is dedicated to the Buddhist priest who supposedly founded Kinosaki Onsen in the 8th century. Legend has it that a priest named Douchi Shonin arrived in Kinosaki in the year 717, where he saw people suffering from incurable diseases. When he prayed for help, a white-haired man appeared to him in a dream, and suggested that he could find a hot spring. The priest believed the oracle, and chanted sutras for 1,000 days, after which hot water gushed from the ground, leading to the creation of the hot spring town.

Once upon a time, visitors had to pray at the temple before they were allowed to enter the baths. While this is no longer the custom, the temple is still a great place to visit and can be combined with an enjoyable stroll through the mountains at Kinosaki's western edge.

The main hall of the temple can either be accessed by a short walk up the mountain or by taking the ropeway, which can take you to an observation deck at the top of the mountain.

Due to loss of habitat, the Oriental stork became extinct in Japan in 1971. The last bird actually died in Kinosaki Onsen's Toyooka City. Konotori no Sato Park was built as a research institute to protect and breed the storks, which are a National Natural Monument, and to reintroduce them to the wild. At the adjacent Stork Culture Museum, visitors can learn about efforts to reintroduce the storks, and see those used for breeding up close. The park is about 10 kilometers south of Kinosaki Onsen, and can be reached via bus from Toyooka Station.

The area around Kinosaki Onsen is great for activities and includes the Kannabe Kogen area. Here, visitors can enjoy climbing and hiking in summer or skiing, snowboarding and snowshoeing during winter. The town of Kinosaki receives regular snowfall and is very pretty during this season, as the river area is lined with fresh snow.