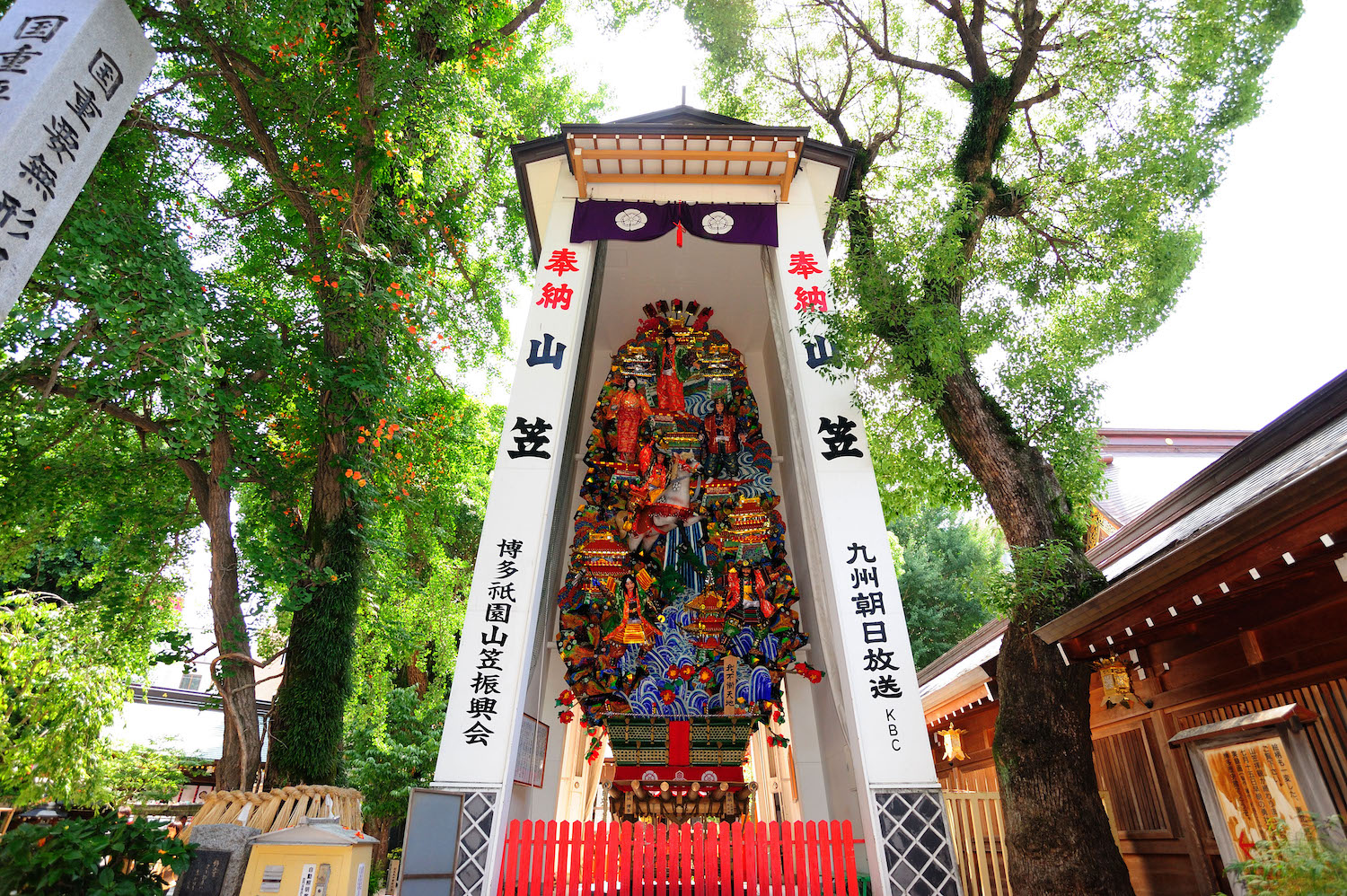 The Hakata Gion Yamakasa is one of Japan's most exciting festivals. Men in traditional costume race through the streets of Hakata with yamakasa—elaborately decorated one-ton floats. If you are here in mid-July, grab a seat and enjoy this festival steeped in history and its vibrant atmosphere.

The festival takes place throughout the Hakata area of Fukuoka , which can be reached by shinkansen from major cities throughout Japan. The subway is the best way to get around in Fukuoka, and there are also local buses and trains.

The Hakata Gion Yamakasa is one of Japan's most exciting festivals. Teams of men race the yamakasa, which are vibrantly decorated one-ton floats. Almost two million spectators gather to watch this classic annual festival, which is centered around Kushida-jinja Shrine.

Each float is more than 10 meters tall and decorated with lifelike figurines of samurai or popular anime characters. The floats are made by their teams with the expertise of master Hakata doll makers. The float exhibited at Kushida-jinja Shrine can be viewed all year round.

The festival is concentrated around the Kushida-jinja Shrine, but the race course covers much of the Hakata area . The intersection of Higashimachi-suji and Meiji-dori offers a great spot to watch the floats and their teams approaching from a distance. Meanwhile, the intersection of Showa-dori Street and Taihaku-dori Street allows each float to be seen twice as they race down the parallel streets.

From July 10, a series of events takes place in which the kakiyamakasa racing floats are carried across the city. The festival culminates with the main race event, called Oiyama, on July 15.

At 4:59 a.m., drums signal the start of the race, and the first float sets off along a five-kilometer course. It takes the fastest teams around thirty minutes to complete the course and teams are judged on both speed and style—teams are required to look graceful and heroic as they run with the floats on their shoulders.

Seven teams compete in the race, each one representing the historic districts of Hakata : Higashi, Nakasu , Nishi, Chiyo, Ebisu, Doi, and Daikoku. Each team spends several months in the lead-up to the festival preparing their float and practicing for the race.

Around 30 runners carry the float at any one time, while others run in front of the float, at the back, or along the sides. Two dai-agari ride atop the float (one facing forward, the other facing backward) and direct the runners.

Using a red baton known as a teppou the dai-agari point out individual runners who should swap with fresh runners. The weight of the float imparts such a toll on the carriers that even the strongest runners do not usually last longer than three or four minutes, before swapping with a better-rested runner.

The history of the festival can be traced back almost 800 years to a Buddhist priest named Shoichi Kokushi. At that time, an epidemic spread across the city and Kokushi. Keen to prevent the spread of the disease, he was carried on a platform around the town praying and sprinkling holy water. This religious ceremony was held annually by the people of Hakata to prevent the disease from returning and gradually evolved into the Yamakasa festival we see today.

The course of the main race starts next to Kushida-jinja Shrine and finishes behind the Fukuoka Asian Art Museum . The route winds through the streets of Hakata, and the corners become the focal point for the racing action, as the heavy floats are swung with a great groan around the sharp corners.

Spectators throw water at the participants to keep them cool as they run the course. The floats are staggered and leave Kushida-jinja Shrine every five minutes, and the racing ends shortly after 6 a.m.

Participants and many residents of Hakata refrain from eating cucumber over the festive period as the cross-section of a cucumber resembles the emblem of the festival's deity, Gion-sama, who is enshrined at Kushida-jinja Shrine.