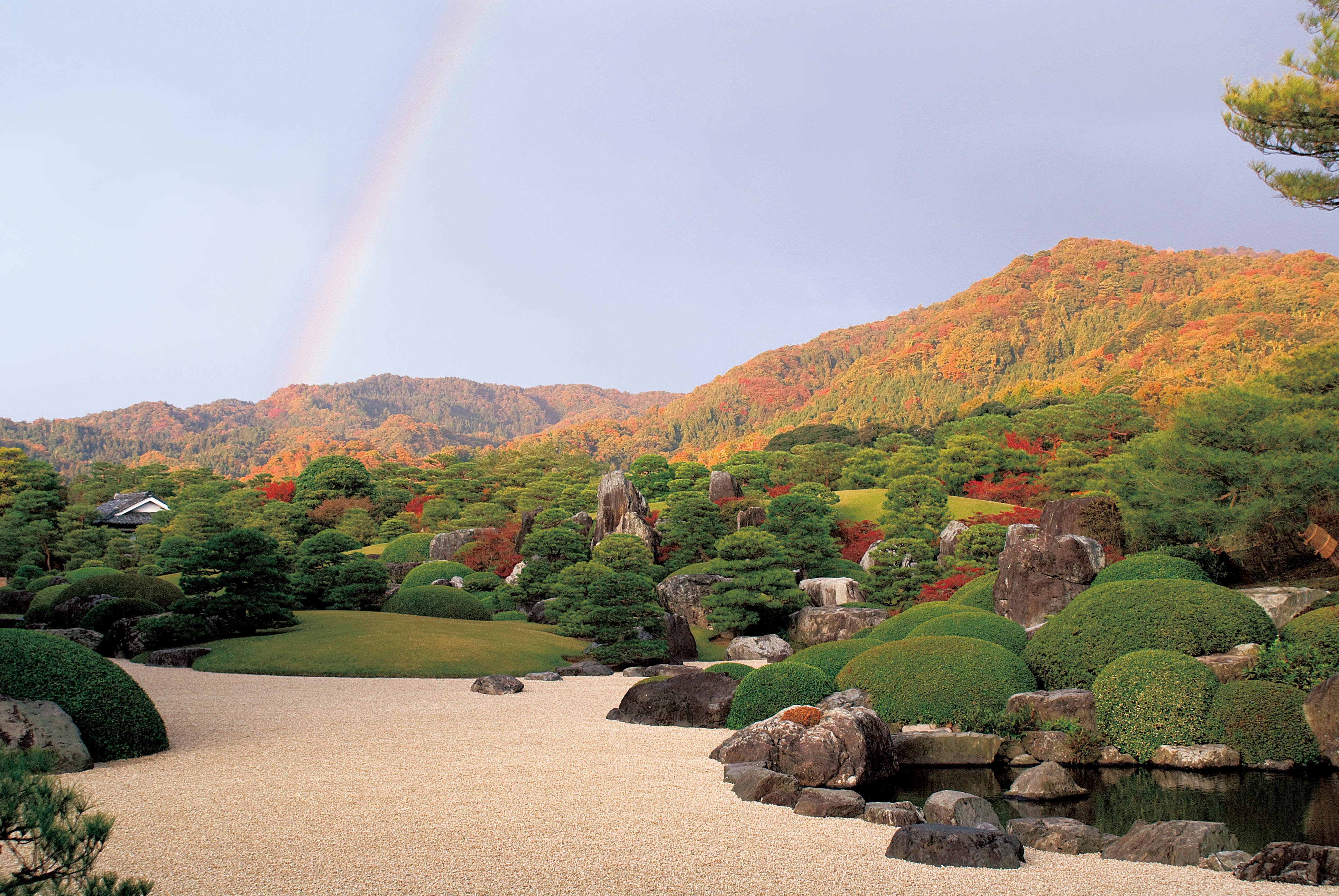 Famous for its gardens as well as its art

The Adachi Museum of Art is the brainchild of a local businessman who believed that a Japanese garden should be seen as a living painting. The museum realizes this concept through the artful juxtaposition of paintings by modern Japanese masters inside with the extensive gardens outside.

The Adachi Museum of Art is accessible by bus from Yasugi Station.

The museum is located in the countryside outside Matsue but offers a free shuttle bus to and from Yasugi Station, which is a 15-minute express train ride from Matsue or 24 minutes by local train.

The museum's 165,000 square meter garden is made up of six smaller gardens each in a different style that you can only view from inside the museum. The largest and most iconic of the gardens here is the White Gravel and Pine Garden, an immaculate landscape with a waterfall in the far distance behind the almost abstract contrast of green and white.

There is a moss garden, a pond garden, and a dry garden. The appearance and character of each garden change dramatically with each of the four seasons. The windows, some expansive, some smaller, perfectly frame your views to create “living paintings.”

When it's time for refreshment

There are two traditional tea houses for the tea ceremony, one a replica of the original at Katsura Imperial Villa near Kyoto, as well as two cafes where you can take a break and enjoy food and drink while enjoying the views. Cafe Midori looks out on the Dry Landscape Garden, and Cafe Taikan offers a view of the Pond Garden.

The art on the walls

The artwork on display also changes with the seasons and is selected from the museum's collection of more than 1,500 pieces by modern masters of traditional Japanese art.

The works of Yokoyama Taikan (1868-1958), credited as one of the founders of the Nihonga style of painting, are heavily represented. You will also see works by Takeuchi Seiho, Hashimoto Kansetsu, Sakakibara Shiho, and dozens more well-established Nihonga painters.

A ceramics hall was built specifically to display the works of Kitaoji Rosanjin (1883-1959), known as a ceramicist, engraver, painter and calligrapher, and Kawai Kanjiro (1890-1966), born nearby in Yasugi and a key figure in the mingei Japanese folk arts movement.

A new annex displays about 200 works by younger, less-established Japanese artists, many of whom have won the Adachi Museum of Art Award, which was started in 1995 to recognize up-and-coming talent.

The ruins of a once-impregnable castle

Only two kilometers from the museum are the ruins of Gassantoda Castle, one of the top five mountaintop castles in Japan. The castle was dismantled when Horio Yoshiharu decided to relocate and build Matsue Castle as the center of his domain.

Climb up past fortified temples and the great stone walls of the battlements, to reach the very top, which soars over the valley. Here, you will realize why it was known as the most impregnable castle of its age.

Not far from Yasugi, where the shuttle bus to the Adachi Museum starts and ends, is Kiyomizu Temple. Sharing the same name as the famous temple in Kyoto but centuries older, this mountain temple has the only three-story wooden pagoda in the region. From the top, you can survey the surrounding forested countryside.

The temple offers several experiences conducted in English by reservation. A restaurant within the grounds serves shojin ryori, the traditional vegetarian cuisine of the Buddhist monks, and you can try your hand at Zen meditation or sutra copying.

Near Adachi Museum of Art

The information on this page may be subject to change due to COVID-19.