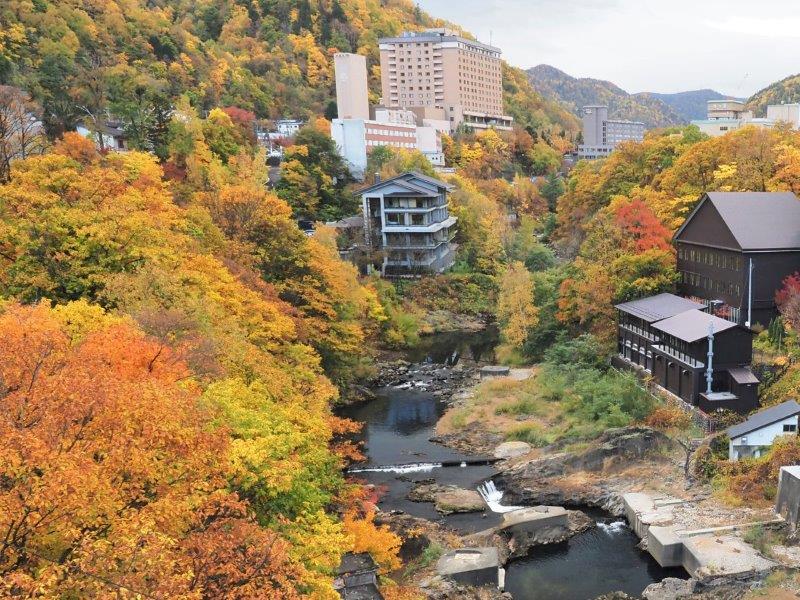 The largest hot spring town in Hokkaido with about 20 ryokan inns, Jozankei Onsen in Shikotsu-Toya National Park is one of Hokkaido's major tourist attractions, drawing 1.4 million visitors a year. A monk named Mizumi Jozan established a spa along the upper Toyohira River in 1866, taking advantage of the healing properties of the water. He brought the injured and sick here for healing, and little by little the area's reputation spread.

You can reach Jozankei Onsen via car or shuttle bus.

Many hotels offer a shuttle bus service from Sapporo Station or Makomanai Subway Station. The Kappa Liner bus departs for Jozankei Onsen from Sapporo, Odori, and Susukino stations 13 times a day. Reservations are required. The bus trip takes about 75 minutes, while journeys by car run closer to 40 minutes.

The spa's waters contain a large variety of minerals, including sodium chloride, sulfur, and sodium bicarbonate. These types of springs are among the most popular in Japan with waters considered beneficial for skin conditions, anemia, cuts and burns, fatigue and much more. Ask the locals to point you to the place that best suits your condition and note that most baths are gender segregated. Take a quick dip, or book into one of the traditional hotel ryokan for maximum relaxation.

The most colorful time of the year

Many mountains surround Jozankei Onsen, making the fall season stunning. This is considered one of the best places to see the autumn foliage in Hokkaido . The autumn leaves begin to change colour a few weeks before central and southern Japan, and are best seen around mid-October.

The time is right

Although fall is the major draw, Jozankei Onsen is popular throughout the year. Arrive at Jozankei Onsen by about 10 a.m. if you plan on a few activities besides visiting an onsen. Stay overnight if possible and catch the bus back to Sapporo that leaves around 5 p.m. the following day.

The symbol and guardian of Jozankei is a water sprite called a kappa, cute imaginary creatures resembling hobgoblins with plates on their heads. The legend of the kappa is still alive in this hot spring resort, and you'll see fanciful statues all around, including the Great Kappa King.

According to legend, a young man once went fishing in the river and disappeared. A year later, the young man appeared in his father's dream, saying, "I live happily with my kappa wife and children." Since then, it is said that no one has drowned in this area.You can buy kappa souvenirs and toys at local shops.

Relax after a long day skiing

Not far from Jozankei Onsen is Sapporo Kokusai Ski Resort . The resort offers excellent runs for beginners through to experts, a snow park for sledding and tube rides, and breathtaking panoramic views of the city of Otaru and the Sea of Japan on sunny days. The ski resort is 90 minutes from downtown Sapporo. After a day of skiing or snowboarding, treat yourself to a hot spring bath in Jozankei.

Hiking through the country for big-scale panoramas

There are many other sightseeing spots around Jozankei, such as Hoheikyo Dam, Jozankei Dam, and Jozan Gensen Park, located in the center of town. Enjoy the free forest foot baths or stroll on the promenade along the Toyohira River, which has hot water bubbling up from its river bed.