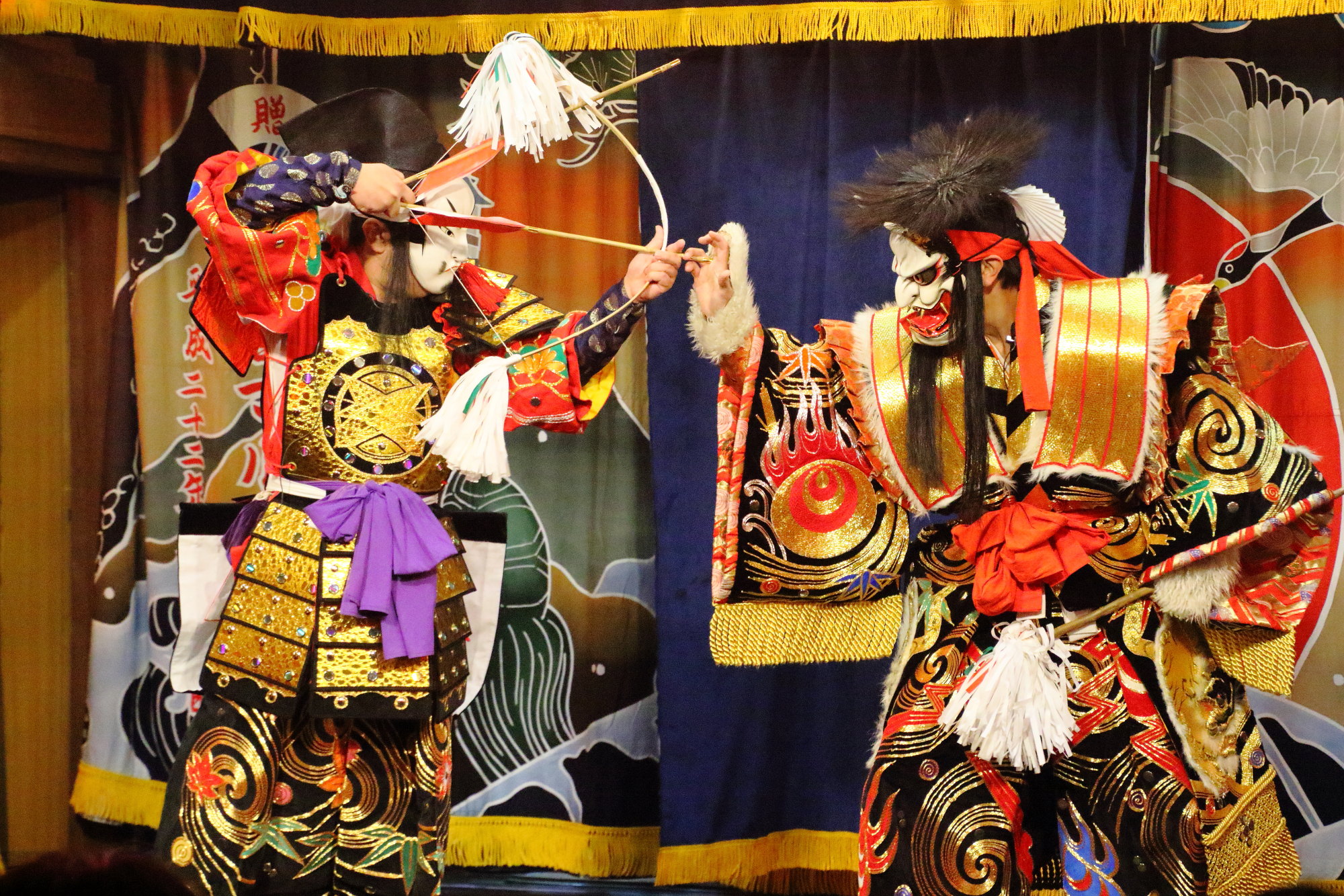 Fast, exciting, colorful and dynamic, Iwami Kagura is an unforgettable kind of masked traditional performance art unlike anything you have seen before. The art has been thrilling local people for decades and is now regularly performed at the famous Gion Festival in Kyoto.

Iwami Kagura is performed all-year-round in the Iwami region of Shimane Prefecture .

From Osaka, there are also direct flights to Izumo Airport. If you are traveling on the shinkansen, go from Shin-Osaka Station to Hiroshima Station and take the Isaribi Highway Bus to Hamada Station.

The stories told in kagura dances are mostly drawn from ancient history books dating from around the eighth century, or from the legends and stories of monsters made famous in Noh theater.

The stories are easy to follow as they often consist of heroes and villains, gods and demons, of good guys and bad guys. Many times, these dances involve intense choreographed sword-fights. However, it's not all action and drama as there are comedic interludes with some dances that approach pantomime. These interludes are sure to have you laughing and cheering.

The most spectacular and unique of all the dances is the one usually performed for the finale, Yamata no Orochi, in which the hero wins the princess's hand by battling eight 17-meter long serpents with blazing eyes and sparks spewing from their open jaws. During the battle, which gets more frenzied as it develops, the eight serpents perform amazing set pieces.

Iwami Kagura is a folk art. But unlike many Japanese arts, and unlike kagura in other regions, it has not remained rigidly fixed to the forms of the past. It has continued to develop while staying true to it's roots.

The pounding drums and wailing flutes are played much faster in Iwami Kagura than in any other kind of kagura. Smoke-machines, wireless mics and fireworks are just some of the other innovations that local groups use to make their performances more thrilling.

The magnificent costumes, some worth upwards of USD $10,000, are more kabuki-esque than normal kagura costumes and have intricately embroidered three-dimensional designs that incorporate miles of gold thread and tiny mirrors. Cleverly designed to allow for instant transformations, Iwami Kagura costumes add another level of surprise to your enjoyment.

The masks are another Iwami innovation. Rather than being carved out of wood, Iwami Kagura uses special masks. Local makers experimented with the unusually strong sekishu washi paper produced locally and came up with a process that not only makes the masks lighter for the dancer to wear, but also allows a much greater level of detail and expression.

The surprisingly affordable masks are bought and displayed in the entrances to many homes and businesses to ward off evil spirits and are a popular and unique souvenir.

Where, when and how to see Iwami Kagura

With more than 130 kagura groups spread over the sparsely populated Iwami region, there is no shortage of opportunities to view this amazing spectacle. Traditionally kagura is performed as an offering to, and entertainment for, the local deities. Fortunately, what the deities enjoy and what we mere mortals enjoy turn out to be remarkably similar.

The best and most authentic location to see Iwami Kagura is at a local shrine festival usually held in October or November after the rice has been harvested. Continuing all night until midnight or dawn, this is the most intimate and memorable way to experience the tradition.

If you are here at other times of the year, Iwami Kagura is now performed at summer festivals, cherry blossom festivals, Obon dance festivals and other events and gatherings throughout the year.

Many of the small hot spring resorts in the region like Yunotsu or Arifuku put on short performances, usually on a Saturday night, to introduce Iwami Kagura to their guests.

Most towns in the region hold annual kagura competitions where several groups are invited to perform dances. Competition between groups is fierce and local audiences are knowledgeable and critical, so great effort is made to put on a winning performance. Held in auditoriums and large halls, these competitions give you the chance to see a wide variety of dances and different styles in one place.