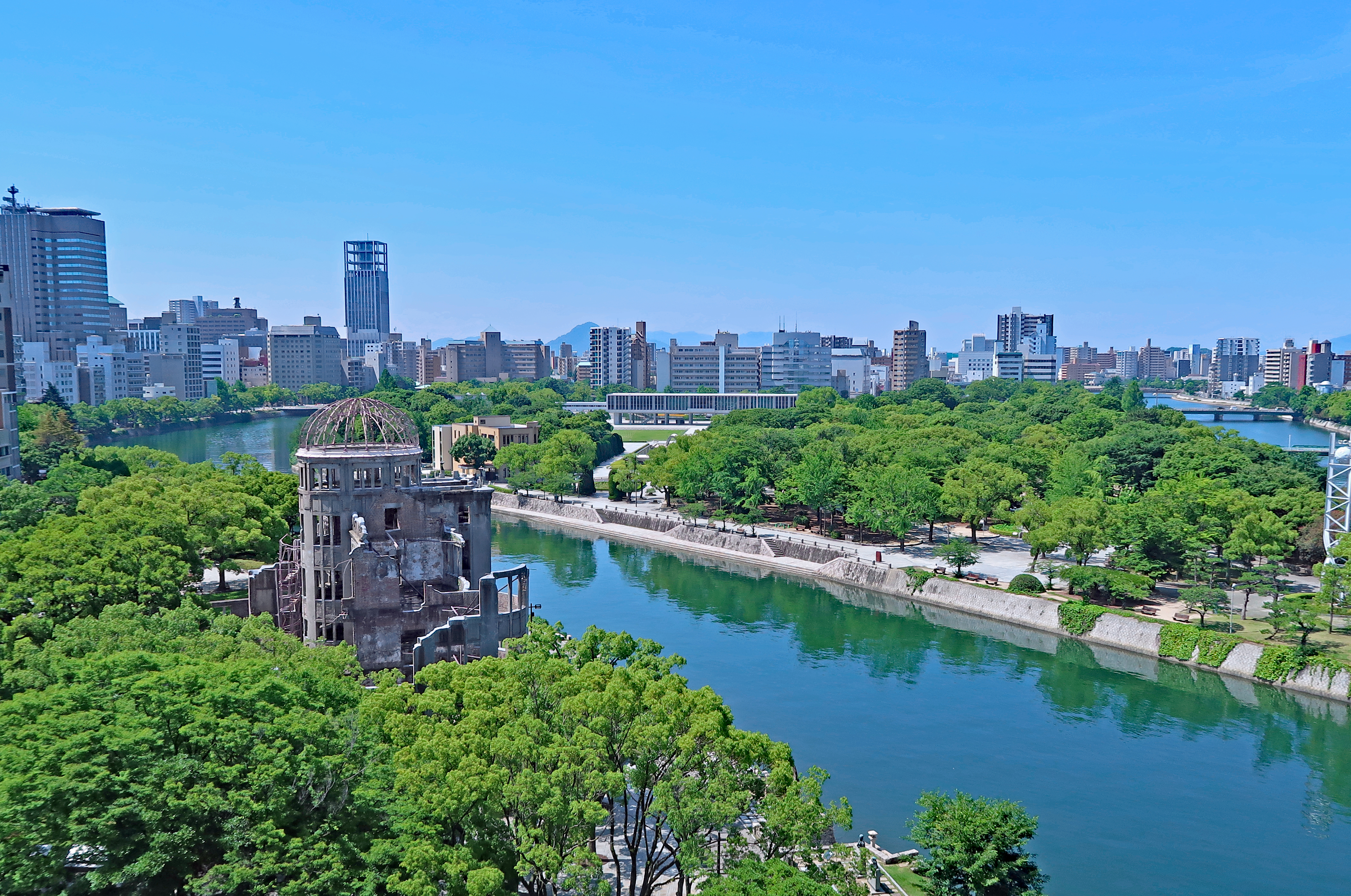 Hiroshima Peace Memorial Park, located in the center ofHiroshima City was built in its current location near the hypocenter of the atomic bombing during WWII on August 6, 1945, in hopes of creating lasting world peace. In addition to the Atomic Bomb Dome World Heritage site, the park is home to the Cenotaph for the Atomic Bomb Victims, where the names of all those who lost their lives are inscribed, and several other memorials.

The Hiroshima Peace Memorial Museum dedicated to documenting the reality of the nuclear bombing, attracts more than 1.7 million visitors a year from Japan and abroad.

From JR Hiroshima Station, take the Hiroshima Electric Railway (Hiroden) streetcar (No. 2 or 6), get off at the "Genbaku Dome-mae" stop, and walk for 1 minute. The total travel time is 17 minutes.

The Atomic Bomb Dome, formerly the Hiroshima Prefectural Industrial Promotion Hall, was designed by Czech architect Jan Letzl. It was highly acclaimed at the time of its construction in 1915 for its bold European design. At 8:15 a.m. on August 6, 1945, the building was destroyed by the world's first atomic bomb dropping, and it burned to the ground. It was instantly engulfed in flames, from the ceiling to the ground, instantly killing everyone in the building. Because the pressure of the blast came from above, part of the wall escaped collapse.

It was called the "Atomic Bomb Dome" for its distinctive domed steel frame and was included in UNESCO's World Heritage List in December 1996 as a symbol of the devastation caused by the first atomic bomb in the history of humankind. It represents the importance of the abolition of nuclear weapons and lasting world peace.

Nearby monuments and memorials

The Cenotaph for the Atomic Bomb Victims (officially the Memorial Monument for Hiroshima, City of Peace) is where the list of names of those who perished in during the atomic bombing is inscribed. It is made of stone and shaped like an arched, gable roof to protect the souls of the atomic bomb victims from the rain and dew.

The Hiroshima Peace Park Rest House, located 170 meters from the hypocenter, burned down during the atomic bombing but was reconstructed after the war. It reopened in July 2020. The first floor is a tourist information center with local products for sale. The second floor is a rest area with a coffee shop, and the basement and third floor are used for exhibition.

The Peace Bell was created as a symbol of the spiritual and cultural movement to achieve a world of peaceful coexistence, free of nuclear weapons and war. The surface of the bell is embossed with a map of the world without borders, symbolizing "One World."

The many children who perished during the atomic bombing, including Sadoko Sasaki, who died of leukemia, are memorialized at the Children's Peace Monument. The statue was erected by Sadako's classmates, who raised funds to build this memorial for a world without nuclear weapons.

The Flame of Peace has burned continually since it was lit on August 1, 1964. It symbolizes the anti-nuclear commitment to "keep the flame burning until the day when all nuclear weapons have disappeared from the earth." The pedestal represents two hands with palms open towards the sky.