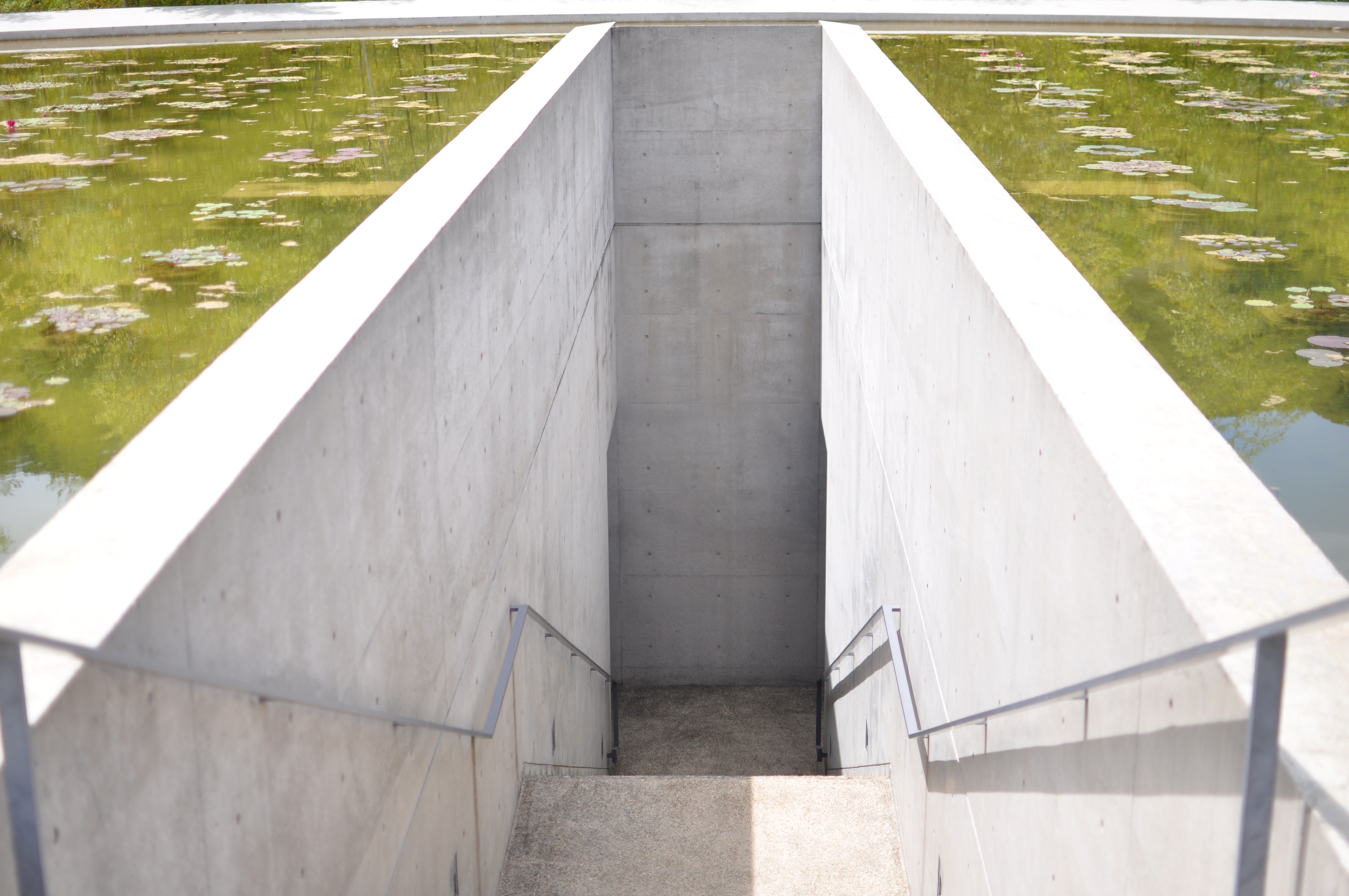 Reflections on a Vision of Paradise

There isn't another sacred place like it in Japan, or probably even the world.

In 1991, renowned architect Tadao Ando was called upon to rebuild the main hall of Honpukuji Temple, a special head sanctuary of the Shingon sect's Omuro school that dated back to the year 815, in the late Heian period.

Ando did the unthinkable. Instead of following tradition, he designed a monumental concrete construction with an enormous reflecting pond on top of the main hall, making this aptly named “Water Temple” radically different from other Shingon-Omuro temples in Japan, such as Ninnaji Temple in Kyoto .

Surrounded by verdant hills on Awaji Island , overlooking Osaka Bay, the Honpukuji main temple building contains a unique labyrinth structure that enshrines a statue of Amida Buddha. To enter is to take a journey into a spiritual realm. More than just a building, the Water Temple is a sensorial experience like no other, in a place of incomparable natural beauty.

Closest station to Honpukuji Temple is Sannomiya station on the JR Kobe Line.

From JR Sannomiya Station, you can take the Awaji Loop bus. This runs in a circuit around the north of the island. Get off at the Tateishikawa stop. Honpukuji Temple is a 10-minute walk from there.

Awaji Island is the largest island in the Seto Inland Sea, with an area of 592.17 square kilometers (228.64 square miles). A transit spot between the islands of Honshu and Shikoku, Awaji's name means “the road to Awa”. Now part of Tokushima prefecture , Awa was the historic province bordering the Shikoku side of the Naruto Strait, where giant whirlpools famously swirl.

Honpukuji Temple, Ando's vision of paradise, also known as the Water Temple, can be reached on an uphill path crossing the original temple compound and cemetery. At the top, visitors follow a pure white gravel path between two 3-meter (10-feet) tall polished concrete walls that lead to a broad elliptical pond—a frequent feature of Ando's work—that reflects surrounding mountains, foliage and sky. Bisecting the reflecting pool is a stairway leading to the temple hall under the water.

It's been pointed out that, with this design, Ando simply inverted the conventional ascent to the holy place, using a series of spaces conceived as a succession for initiation into heaven. Descending between floating waterlilies and lotus blossoms—a symbol of heaven—one gets the sense that this is a place that transcends the ordinary, a domain where architecture and nature blur in the placid mirror of water, leading to meditation and asceticism.

The mere act of walking down a concrete stairway is usually mundane, but not when it bisects a massive reflecting pool adorned with waterlilies and lotus blossoms. One makes the descent into momentary darkness, below the water, as if in a dream. Through labyrinthine corridors, the traveler emerges into the sacred space of the Buddhist temple. Access to the sanctuary is not immediate. There is a sense of searching for truth hidden on a secret path to the Place of Worship.

Honpukuji Temple's interior is saturated with vermillion color in contrast to the monochromatic outdoor exterior, reinforcing the sense of distinction between the extraordinary and the ordinary. The intense orange-red glow seems to pulsate from some invisible source at the core of the temple, suffusing this inner and most sacred space with heavenly light.

There one finds the statue of Amida Buddha, who according to the scriptures of Mahayana Buddhism, is known for his longevity, pure perception and deep awareness of the phenomenon of emptiness. Otherwise known as The Buddha of Immeasurable Light and Life, his sanctuary conveys a deeply spiritual feeling.

While Honpukuji Temple is awe-inspiring any time of day or the year, visitors and especially those who enjoy photography are recommended to see it at sunset. The vermilion color of the inner sanctum is most intense during sunset as warm light radiates through a west-facing window. Given that Buddha originated in India, to the west of the “Land of the Rising Sun”, the effect is both symbolic and aesthetically pleasing.

As for the best time to enjoy the reflecting pool, visitors can see the waterlilies in bloom from May to September, while the sacred lotuses—a symbol of Heaven, representing the emergence of Amida Buddha—are most beautiful from June to July. But the place is wonderous anytime of the year or day for that matter.